THE FORTRESS OF FEAR

The Adventures of Alaric Blackmoon - Episode 4: 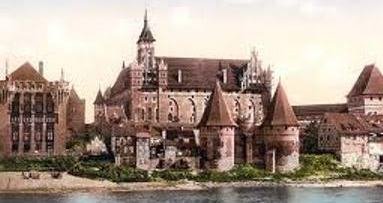 You are Duke Alaric Blackmoon and after your exploits in finding "Die Feuerfaust - The Fist of Fire" and restoring it to its rightful place in the cathedral in Lubeck, you arrived at the vast Marianberg Fortress for your initiation into the Order of the Teutonic Knights only to find that the fortress has been captured by the evil sorcerer Wladyslaw.

You are faced with the daunting task of finding your way through the fortress to the final confrontation with Wladyslaw.

Are you man enough to accept the challenge?

* Blorb download location: https://www.adrift.co/game/1366 (Only for use with the ADRIFT 5 Runner installed).

What players said about "The Fortress of Fear":

The Fortress of Fear (FoF) is the 4th episode of The Adventures of Alaric Blacmoon. On the other hand, it was the first Alaric Blackmoon game to be written with ADRIFT, so I was quite curious if it had the same quality as the previous episodes. I think it has and overall FoF is a very fine game.

Without going into too much detail, Alaric must get to the bell tower of a big fortress, which is under siege by an evil sorcerer. The sorcerer has slaughtered most of the good staff of the fortress so there are ghosts everywhere requiring objects to let you pass. In addition, they might help you, if you help them. You will also meet a few people who are still alive, and in the end, you will of course face the evil sorcerer.

The game has the same appearance and feel as previous episodes, which is good. As usual, it is necessary to search, look under and look behind objects whenever it makes sense, to ensure you do not miss an object. The puzzles range from easy to difficult but always logical.

If you become stuck, the first place to look for inspiration is the VOCAB command, which gives you a list of verbs understood by the game. Typing help gives you the email address of the author, which I did use more than once since the game is very big and I believe most people will become stuck at some point. I encourage everyone playing Larry Horsfields games to ask for help in this way instead of just giving up, since his games have a lot to offer.

Since the game is very good, it certainly qualifies for at least four stars. I did consider five stars but I decide to stick to four this time around, which is also a very good rating. If I should comment something I was less fond of, it would be the time-based events by the end of the game, which requires that you type a little fast if you do not want to die. This is just my personal preference that I do not like real-time elements in text adventures. It is not a big problem though since the player can undo his last moves and try again.

EDIT: I have subsequently been informed that it is possible to disable the timed moves by typing TIMEOFF. This was actually described in the playing instructions and list of commands but I have overlooked this. This is a cool little feature. Thus my above reason for not giving five stars is not really valid, so I adjust my rating to five stars for this highly enjoyable game.