THE DWARF OF DIREWOOD FOREST

Adventures in the World of Alaric Blackmoon - Episode 2: 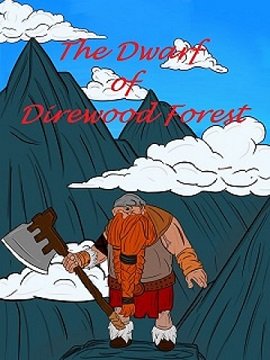 You are Grimmel, son of Mulkin of the dwarven Whyldstone clan and you live in the vast Direwood forest in the northern part of the kingdom of Hecate. Some of your clanmates have been captured by the neighbouring Turdrock clan and you - rather rashly - have volunteered to try to rescue them.

Are you dwarf enough to save your clanmates from the clutches of the rival dwarven clan? Find out in...

THE DWARF OF DIREWOOD FOREST

* Blorb download location:  https://www.adrift.co/game/1639 (Only for use with the ADRIFT 5 Runner).

What players said about "The Dwarf of Direwood Forest:

First I must say that I beta-tested this game. This game is somewhat smaller than most of Larry Horsfield's games, which tend to be massive. Still, it is long enough to get immersed and it is in Larry's usual style and quality. You take the role of the dwarf Grimmel several years before he appears in the game "The Axe of Kolt" also by Larry Horsfield. He has to free some of his clan mates which are held prisoners by another clan.
The game has a nice story, good gameplay and good puzzles though the individual puzzles are not necessarily very memorable, which is hard to achieve in smaller games. But still a very entertaining game.
[b]Parser: 4 stars[/b]Larry is among the few author's who usually manage to produce a game with a strong ADRIFT parser (probably because most ADRIFT authors chose ADRIFT because it doesn't require programming knowledge - but still it helps to know how ADRIFT works).

[b]Atmosphere: 4 stars[/b]The setting, writing and use of text colour all add to an immersive atmosphere.

[b]Cruelty: Tough[/b]As most of Larry Horsfield's games, they can become unwinnable, though you usually will have a pretty good idea when and what causes it. If you save often without overwriting old save-files, it is no big deal.

[b]Overall: 4 stars[/b]Though the individual puzzles may not be that memorable, the overall story is and everything is in Larry Horsfield's usual style and quality.