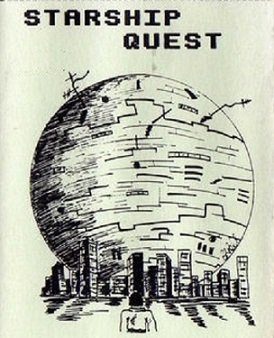 You are Lieutenant Mike Erlin, Astro-Navigation Officer on board the FSP Survey Corps spaceship "Stellar Queen". Your solo mission on the "Magnetic Moon" was a great success, but the ship is now heading out of the system to a hyperspace jump point, with orders to take Commander Davey, sole survivor of the wrecked scoutship "Pathfinder", to the nearest hospital base without delay.

You are convinced that the answer to the mystery of the two discs that were given to you by Jaelaine, the beautiful High Priestess of the Psian people - discs that she called the "keys to the universe" - lies on the mother planet of the moon, on which are several huge, abandoned cities and what appear to be vast, empty spaceports. You have told the captain of your theories but he tells you that his orders are specific and the ship cannot be stopped or turned around to allow you to go back to the planet. He orders you to attend to your duties and forget any ideas about jumping ship.
You decide that you cannot rest until you have discovered what these "keys" are for and resolve to once again go it alone and disobey the captain's orders. But HOW exactly are you going to get off the ship - the hyperspace jump is just a few minutes away!

Then you have it - the lifeboats! If you can get to one  of  the  ships'  lifeboats, you can fly back to the planet - but you only  have THREE MINUTES to get yourself some equipment and then launch yourself off the 'Queen in one of the lifeboats - can you do it?

* Blorb download location: https://www.adrift.co/game/1529 (Only for use with the ADRIFT 5 Runner).

What players said about "Starship Quest":

I helped beta-test this game.
This is the second game in the Mike Erlin trilogy. I like them all very much but this is my favourite. The game begins shortly after the first game (Magnetic Moon) ended: You have received two discs called "the keys to the universe" and you feel certain that the purpose of those two discs can be found on the mother planet of the "magnetic moon". Once again you disobey orders and go to explore the planet after "escaping" from your duties on the spaceship "Stellar Queen".
With the risk of repeating myself, this game is written in Larry's usual style, with lots of ingenious puzzles and requiring that the player is examining, searching etc. everything thoroughly. If you already played "Magnetic Moon", go ahead and play this - it is even better than the first game. If you haven't I recommend that you play "Magnetic Moon" first, though it is possible to play this without having played the first game. Certainly recommended.