DIE FEUERFAUST - THE FIST OF FIRE

The Adventures of Alaric Blackmoon - Episode 3: 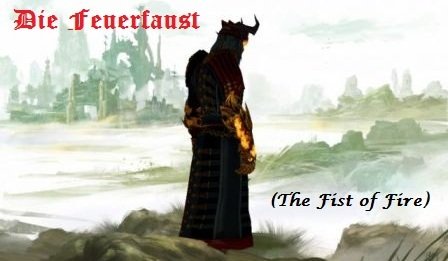 You are Alaric Blackmoon, Duke of the Duchy of Charlton in the kingdom of Hecate. The stories of your exploits in finding the lost "Axe of Kolt" and solving the mystery of "The Spectre of Castle Coris" have spread far and wide, even across the seas.

A deputation of Teutonic Knights from the Hanseatic League, a confederation of City-states far to the south across the Baltic sea, have come to ask for your help in find the stolen symbol of the federation, "The Fist of Fire" - or in their language, "Die Feuerfaust".

Eager for some action, you readily agree, and set sail for Lubeck, the capital of the Hanseatic League. However, a violent storm hits the ship one night driving it onto a reef. You are thrown overboard and manage to cling to a broken spar.

You are knocked unconscious and wake up next morning on a deserted beach.

* Blorb download location: https://www.adrift.co/game/1460 (Only for use with the ADRIFT 5 Runner).

What players said about "Die Feuerfaust - The Fist of Fire":

Rags to Riches - A Second Time:

Die Feuerfaust is the third installment in the Alaric Blackmoon-series by Larry Horsfield. Having played and tested the previous two, I knew pretty much what I was in for, and looking forward to it.
I was not disappointed. Unapologetic (have I used this word in an Alaric-review before? I just might have...) oldschool adventuring, big and varied settings, some use of magic, some killing of foes, and at least one very elaborate, well thought out puzzle (Have you ever tried any horseriding? Wait till you try riding a wild Zampf).
Also: some lack in depth of implementation and interactivity in the large and sprawling settings, as is to be expected in the oldschool tradition.
A classic storyline drives the game forward: Whereas Alaric was a run-down mercenary going on a quest that lead him to glory in Axe of Kolt, in this game Alaric is stranded after a shipwreck and has lost all his belongings. He must work his way through various obstacles and tasks toward his final goal, recovering the famed Fist of Fire.Nothing new, but tried and trusted adventure fare.
Many NPCs, most still smelling of the cardboard they were cut out of, some more fleshed out. All do what they're supposed to do in a text-adventure such as this: drive the action forward with clues and gifts.
Many, many puzzles, most quite straightforward and not too big. And as mentioned, a great Zampf-taming sequence to sink your Hero-teeth into.
All in all, the best of the three I have played so far. The evolution begun in Spectre of Castle Coris continues: tighter gameplay, clearer subgoals so less wandering about, more engaging story.
Not must, but certainly should-play.